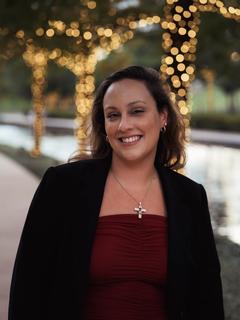 Ministry Emphasis and Vision Statement
I am not interested in a title crazy ministry. God called me to stir up the church when I was very small, and I have watched Him add unto me according to His Word and His will. None of my ministry is a focus on myself, but I am obeying the Lord by wholly, working towards the vision of getting souls saved while giving Him all the glory; there is absolutely no room to glorify myself or anyone else.
Biography
Melanie was born and raised in Las Vegas, Nevada, to a God-fearing Mother and Father who spend most of their lives on their knees seeking God's will. Her mother led her to the Lord when she was just a toddler at age three. A few years later, Melanie was aware that God had called her to separate herself and prepare for ministry.

During Melanie's college years at Sam Houston State University, God began reminding her of His call on her life. However, she began going through a very difficult schooling process, put in place by God, which she later learned was used to get her attention and prepare her for her upcoming ministries. During this time, Melanie was involved in a very abusive marriage, and she began to lose focus on what God wanted her to do. One night, following a horrifying experience with her husband, she began asking God why she had to endure the pain and life she was given. God reminded her immediately, "You said you would live any life I gave you."

About a year and half after this night, God miraculously and swiftly delivered her from her abusive marriage, where she was immediately able to refocus on what she was called to do for Christ. God reconfirmed to her over and over again, His special call on her life. Melanie was able to see in the past how God was setting her up for HIS future.

Melanie has been involved in many local church ministries since she was a teenager, including youth ministries, as the youth leader in her uncle's church, Sunday school teacher, interim pastor and Children's Ministries leader. With much needed schooling, and with many years of fasting and prayer, God placed Melanie in her own ministry, and now travels where needed preaching the true and whole Word of God to the broken and the lost.

Melanie's heart remains in the modern day church, seeing and understanding the desperate need for the Body of Christ to return to its first love. She believes fully that God is still a miracle working God; He is the same yesterday, today, and forever. She is a daily witness that full submission, reverence, and surrender to Christ is all that is needed to invite the Holy Spirit in to do His work in the local church, inside and outside building walls.
References
Pastor Joey Hamby
Reunion Church
PO Box 1975
Sugarland, Texas 77487
832-877-7431

My Vision for the Local Church in the 21st Century
My vision for the church is that we return to Christ. Revival is still possible, and miracles of the First Century Church are still available to us in the Twenty-first Century Church, but it takes work on the part of all believers. God did not call His people once to be saved, and then do what we want. Our life is to be lived out with daily repentance of sins, and consistently seeking the will of God.

The modern day church has forgotten what it has been called to teach believers and unbelievers; Jesus paid a costly and serious price for us so that we can commit our lives to an intimate relationship, praising and worshiping Him for separating us from the world. He did not pay this priceless, expensive debt for His followers to leave Him behind for cheap thrills and knockoff religions. Instead we are called to preach His Word to the lost, and bear fruits worthy of repentance. The lukewarm church must be reminder of our duties as followers of Christ.

"When Christ calls a man, He bids him come and die."-Dietrich Bonhoeffer
My Definition of an Evangelist, and His/Her Role in Revival
An evangelist has an important role in the body of Christ to preach salvation to the nations. While all members of the Body are called to disciple and tell others the Good News, an evangelist dedicates their whole life to this work for God. Those called to sit in the office of an evangelist MUST be sensitive the moving of the Holy Spirit at all times. As one of the Five Fold ministries, I fully believe the evangelist must be open to the moving of all nine gifts of the Holy Spirit inside and outside the church walls.

We are responsible for allowing God to receive 100% of the glory, because He is the only one who saves and sets free. 1 Corinthians 1:31-..."Let the one who boasts, boast in the Lord." While we are the empty and willing vessels to be used by God, without Him, we can do nothing.

After graduating from high school, Gerald was married to Phyllis Riley in 1969, and then moved to Washington, D.C. Gerald was drafted into the military and served in Vietnam where he began using drugs that controlled his life for 18 years. In 1989, he gave his heart to Jesus and then entered the Teen Challenge Ministry where he was delivered from drug addiction and discipled. God called him to preach his Glorious Gospel. Gerald is an...