Biography
Dave Roever grew up in a preacher's home in South Texas. He had his sights on being a preacher himself, so the last thing on Dave Roever's mind was going to war. At the height of the Vietnam conflict, Roever received his draft notice. Having no desire to serve in the infantry, he joined the Navy and served as a river boat gunner in the elite Brown Water Black Beret stationed in Vietnam.

Eight months into his tour of duty in Vietnam, Roever was burned beyond recognition when a phosphorous grenade he was poised to throw exploded in his hand. The ordeal left him hospitalized for fourteen months, where he underwent fifteen major surgeries. His survival and life are miraculous.

Today, with his humorous style, Dave Roever is enthusiastically received both nationally and internationally as a public speaker. A gifted minister of the Gospel, Roever and his evangelistic team minister in city-wide crusades; men's and youth conventions; and churches. God uses Roever's unique style of presenting the Word of God under the anointing of the Holy Spirit to draw people, especially youth, to Christ. His services are requested in a variety of settings including public schools at the secondary level, military installations, and business conventions. Roever is also a frequent guest on national television talk shows.

Roever's message is one of hope. Using his war experiences of loneliness, peer pressure, disfigurement and pain, and his experiences in wholesome relationships with his parents, wife, and children, Roever talks about solutions to problems such as drug and alcohol abuse, drinking and driving, teen pregnancy, suicide and low self-esteem. Since 1976, Roever has spoken face-to-face with more than six million students in public schools.

Dave Roever is founder and President of two non-profit corporations: Roever Evangelistic Association (R.E.A.) and Roever Educational Assistance Programs (R.E.A.P.) Dave is the author of three books: Welcome Home, Davey, his first autobiography; Scarred, an updated autobiography which presents the philosophy that has evolved through years of being scarred; and Nobody's Ever Cried For Me, a collection of impacting stories of youth and adults Roever has met.

Dave and his wife Brenda make their home in Fort Worth, Texas. They are the parents of two adult children, Matt Roever and Kim Chapin, and the grandparents to four grandchildren. Matt and Kim, along with their spouses, work in full time ministry. 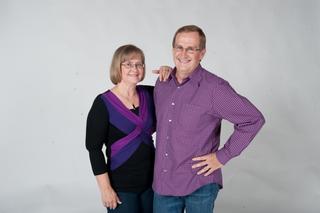 Michael was born and raised in the home of an Assemblies of God pastor. He got saved as a small child. After graduating from North Central University he and his wife Linda began full time ministry. From 1974 to 1984 they served as pastors in the Illinois District. Since September of 1984 they have served as full time evangelists. Ministry has taken them into a dozen different nations and nearly two dozen States. He preaches over 200 times...