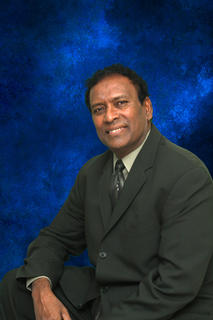 Ministry Emphasis and Vision Statement
Reaching world through the love of God and through the power and the presence of the Holy Spirit one soul, one church and one community at a time. Ministering healing and deliverance in the powerful and matchless name of Jesus to set the people free and to glorify God.

Biography
Born in India, John Jeyaseelan was raised by Christian parents but did not commit his life to Jesus until he was hospitalized with bleeding ulcers at age 19. When all hope was lost and doctors told his mother that John would surely die, it was Jesus who came into his room to heal him miraculously. To the amazement of his Hindu doctors, he recovered completely and from that moment on, Jesus was the Lord of his life.

John's healing and conversion was the beginning of fulfillment of God's word to his mother years before when God told her, before his birth, that her first-born son would be used as His servant around the world.

God brought John to America through an educational program at Penn State University 1979. Married to his wife Hema, an attorney in India, in 1981, John left Penn State and moved to Daytona Beach, Florida in 1984. There John served as an Assistant Professor of Aerospace Engineering at Embry-Riddle Aeronautical University. In 1990, in response to God's call, John resigned his teaching assignment to inaugurate and give his full attention to Bethel Ministries.

Today, John is President of Bethel Ministries, an evangelistic association with great emphasis on prayer, a call to unity for the body of Christ and reconciliation with the Jewish roots. Bethel Ministries, a member of ECFA (Evangelical Council For Financial Accountability), sponsors John's ministry throughout the United States and around the world. Since 1990, festivals have been held in Africa, Russia, Germany, West Indies, India, Hungary, Singapore, Australia, Malaysia and Indonesia. In the US, John has ministered in Pennsylvania, New Jersey, Georgia, North Carolina, California and Indiana. Here in Florida, in obedience to God's word in II Chronicles 7:14, John formed "A City-wide Call To Prayer"  which continues to bring local ministers and churches together for healing, reconciliation and prayer. To this date, citywide meetings have been pioneered in Daytona Beach and DeLand (FL), State College (PA), Cartersville, LaFayette and Douglasville (GA). These meetings have changed their cities and brought healing and reconciliation to their respective communities. John also had participated in the National Prayer Breakfast in Washington, DC and in Canberra, Australia several times. John is in the process of building a Global Prayer Center in the heart of Daytona Beach which will be used as a 24/7 Prayer Center to pray for the healing of communities and the nations of the world.

Since 2002 John spearheaded "Peace for Israel Festival"  in Daytona Beach which has drawn thousands of Christians and Jews annually to come together to pray for the peace of Jerusalem. John also spearheaded and hosted "Peace for Israel " “ Jerusalem Festival"  in Jerusalem every year since 2005 where hundreds of Christians and Jews traveling from the US had assembled to pray for peace. You may watch one of the festival videos on the web site www.peaceforisrael.org

John and Hema are married since 1981 and are the proud parents of two beautiful daughters, Elizabeth and Rachel. For further information, please contact:

3) Rev. Kenneth Hope
Clearwater, Florida
My Vision for the Local Church in the 21st Century
Individuals to operate in the fullness of the Holy Spirt. Families united by the love of Jesus. Reaching the communities through prayer and missions
My Definition of an Evangelist, and His/Her Role in Revival
An evengelist comes to the local church in the power of God, not only as the Lord's servant but also as the servant of the local pastor. He/she is there only to exalt the name of Jesus and to serve the local congregants without any self promotion or self-seeking. He/she also must carry the needs of the local congregation even after he/she is done ministering so as to continue to pray for them and remember them before the Lord.

Evangelist Lorne Digges was raised in a Christian home and was taught about serving the Lord since the day he was born. After being healed of leukemia at 4 years old(which he suffered from for about a year), Lorne knew that he was called to ministry service. During Lorne's illness, his mother; Charlotte; prayed the Hannah prayer: "Give me my son, and he will be in Your service all the days of his life." Growing up in church...